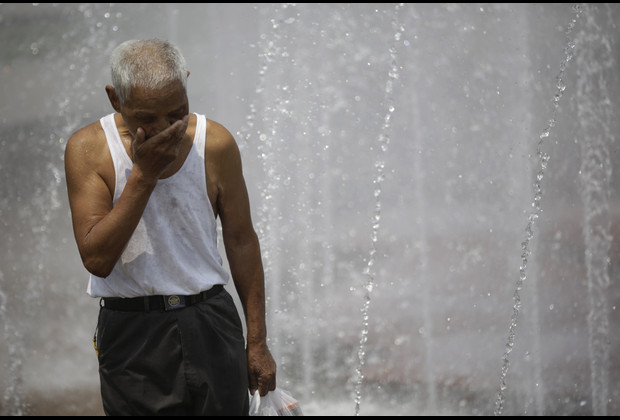 SHANGHAI (AP) — It’s been so hot in China that folks are grilling shrimp on manhole covers, eggs are hatching without incubators and a highway billboard has mysteriously caught fire by itself.

The heat wave — the worst in at least 140 years in some parts — has left dozens of people dead and pushed thermometers above 40 degrees C (104 F) in at least 40 cities and counties, mostly in the south and east. Authorities for the first time have declared the heat a “level 2” weather emergency— a label normally invoked for typhoons and flooding.

“It is just hot! Like in a food steamer!” 17-year-old student Xu Sichen said outside the doors of a shopping mall in the southern financial hub of Shanghai while her friend He Jiali, also 17, complained that her mobile phone had in recent days turned into a “grenade.”

“I’m so worried that the phone will explode while I’m using it,” He said.

Extreme heat began hitting Shanghai and several eastern and southern provinces in early July and is expected to grip much of China through mid-August.

Shanghai set its record high temperature of 40.6 C (105 F) on July 26, and Thursday’s heat marked the city’s 28th day above 35 C. At least 10 people died of heat stroke in the city over the past month, including a 64-year-old Taiwanese sailor, the official Xinhua News Agency said.

Wu Guiyun, 50, who has a part-time job making food deliveries in Shanghai, said she has been trying to linger inside air-conditioned offices for as long as possible whenever she brings in a takeout order. Outside, she said: “It’s so hot that I can hardly breathe.”

The highest temperature overall was recorded in the eastern city of Fenghua, which recorded its historic high of 42.7 degrees (108.9 F) on July 24.

On Tuesday, the director of the China Meteorological Administration activated a “level 2” emergency response to the persistent heat wave. This level requires around-the-clock staffing, the establishment of an emergency command center and frequent briefings.

Some Chinese in heat-stricken cities have been cooking shrimps, eggs and bacon in skillets placed directly on manhole covers or on road pavement that has in some cases heated up to 60 degrees C (140 F).

In one photo displayed prominently in the China Daily newspaper, a boy tended to shrimps and an egg in a pan over a manhole cover in eastern Chinese city of Jinan.

In the port city of Ningbo in Zhejiang province, glass has cracked in the heat, vehicles have self-combusted, and a highway billboard caught fire by itself, sending up black smoke in the air, according to China Central Television. The broadcaster said the heat might have shorted an electrical circuit on the billboard.

In the southern province of Hunan, a housewife grabbed several eggs stored at room temperature only to find half-hatched chicks, state media reported.

A joke making the rounds: The only difference between me and barbequed meat is a little bit of cumin.

Like Loading...
‹ PRAYER NEEDED for Persecuted Brother!
You know it must be bad when: the IRS chief says he’d rather not switch to ObamaCare plan ›