Why A Former Model Is Covering Up For Love 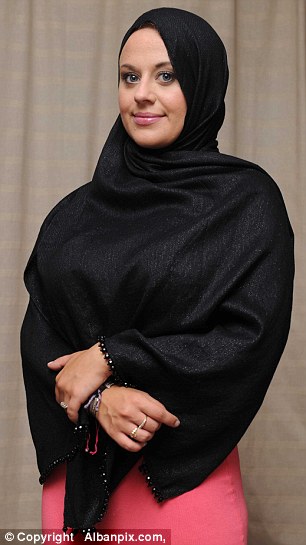 A British model and mom is ditching her life of posing in lingerie for one of modesty and obedience as a Muslim wife, said U.K. reports on Monday.

“Meeting Mohammed has made me really look at my life,” Carley Watts, a model who regularly bares almost all for publications such as Elite Online Magazine, told the Sun about her lifeguard boyfriend, Mohammad Salah. She added, “My friends think I’m mad and that this is just a phase.”

The two met while Watts was vacationing in Salah’s native Tunisia in April, when, Watts explained, every man flirted with her except for Salah.

“I saw it as a challenge,” she told the Sun. “I went over one day and asked him his name. His English wasn’t very good so at first we spoke in a mixture of English and what little French I remember from school. We went for a walk on the beach together and things developed from there, but all we did on the first trip was have a kiss.” She went back to visit him three weeks later and they soon fell in love.

So in October, the model says, she and her 2-year-old daughter, Alanah, will move from Norfolk to Monastir, in Tunisia, where she will convert to Islam before marrying Salah in the spring.

In Tunisia, the divide between secularists and Islamists has widened since the ouster of former President Zine El Abidine Ben Ali more than two years ago. The role of Islam has grown in Tunisian society and been included in a new constitution, but the divisions are seen as less severe than in countries such as Egypt.

Watts’s spokesperson did not return a call from Yahoo! Shine seeking comment on Monday. But in the Sun interview, Watts acknowledged that she and her fiancé are quite different.

“Mohammed is solely focused on family life,” said Watts, who claimed her old job required her to “generally act outrageous.”

“Now my life is set to change beyond belief,” she told the Sun. “I don’t have any worries, though.”

Her new in-laws won’t be informed of her modeling career, she said, adding that the fact of her being a single mom was alarming enough. “He explained that he loved me and wanted me to be his wife and they have come round to that,” she said. “He accepts that [glamour modeling] is what I do and doesn’t try to change me. But he says once we are married my body is for his eyes only.” Watts now covers her shoulders and ankles out of respect when she is with her future in laws. She also fasted during Ramadan last month.

Watts seems drawn in by the customs. “Single mums don’t exist in his world and men who get unmarried women pregnant go to prison. It is all about family and he idolizes his mother. These are the kind of values I love about their culture,” she explained. “Women are treated with respect and they also respect themselves and their bodies. They don’t do one-night stands or casual flings. When I’m with Mohammed I feel so content, calm and happy. I know he’s the kind, family man for me.”

She added, “Since meeting him I feel like my life has a different meaning and direction. Morals and family values are more important to me now.I know it sounds mad when I’m still getting my boobs out for a living, but it’s for the best.”

A handful of critics on Twitter had nothing but vitriol for the model’s decision. “You’ve pissed away ur career, & now ur’e nothin but a controlled woman, a slave,” wrote one. Another warned her not to unpack in Tunisia. But a lone tweeter praised Watts, writing, “Welcome to islam dear, masha allah [praise God], finally u got right path.”

My Comment: I feel so sorry for this poor little girl. She already has sadness in her eyes in both pics, for some reason, not sure why…my heart goes out to her for what she faces, without choice, and without knowledge.  Let’s pray for these people, that they will be safe and find Christ, before it’s too late.  -Lyn Leahz

Carley and her daughter Alanah

Like Loading...
‹ BARR: The U.N. Comes After Americas Guns – Barack Obamas OK of a gun-control treaty would destroy the Second Amendment
Roger Waters Begs For God’s Curse To Be Upon His Head, and All Who Follow His Destructive Plea ›