Million Muslim March Planned in DC on Anniversary of 9-11 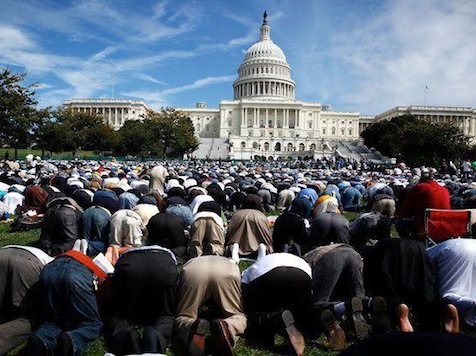 A group called The American Muslim Political Action Committee (AMPAC) is planning a one million Muslims march to Washington D.C. on September 11th. The timing of the group’s march is seen by many as tasteless (to say the least) considering it is scheduled for the anniversary of the worst domestic massacre in American history perpetrated in the name of Islam. AMPAC ups the tasteless quotient by issuing “demands” for the American government:

We at AMPAC (American Political Action Committee) are planning an historic event for 9.11.13 where one million Muslims will march to Washington D.C. and demand that our civil rights be protected by our government.

We are demanding that laws be enacted protecting our 1st amendment . We are asking President Obama to fulfill his promise from his first campaign for Presidency of a transparent government. Lastly we are asking for the release of the 9/11 commission report to the American people.

The group seems to rationalize the date chosen for their march by claiming that the media has been lying to the American people with regard to the role Islam played in the 9/11 attacks:

On 9.11.01 our country was forever changed by the horrific events in New York. The entire country was victimized by the acts done on that day. Muslim and Non Muslim alike were traumatized but we as Muslims continue 12 years later to be victimized by being made the villains. To this day every media outlet and anti Islamic organization has committed slanderous and libel statements against us as Muslims and our religion of Islam.

Yet our Government either sits idly by and does nothing to protect our freedoms or it exacerbates the problem with its constant war on terrorism in Islamic countries, congressional hearings on Islam in America, and its changes to the NDAA law.

These lies told to the American population has made it impossible for us to do true Dawa. Why do we have to defend our religion while doing Dawa? Why can’t we just share the perfection of the Quran and the beauty of our beloved Prophet Muhammad (SWS)?