Home › Bible Prophecy › Sinkhole Takes On “Volcano-Like” Quality: Is This More Proof That The Louisiana Sinkhole Is Actually A Volcano?

Sinkhole Takes On “Volcano-Like” Quality: Is This More Proof That The Louisiana Sinkhole Is Actually A Volcano? 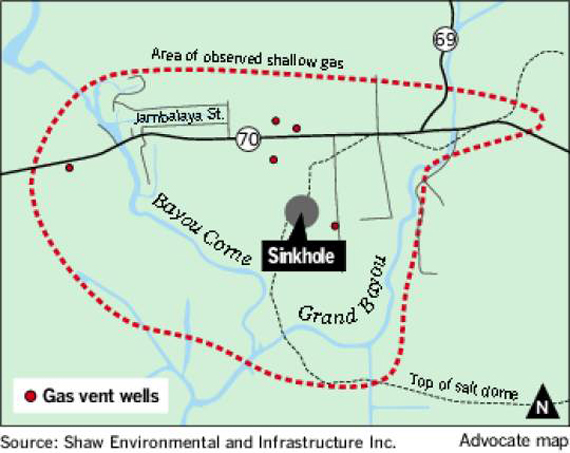 Is the Louisiana sinkhole actually a ‘volcano’? According to this video report from  Pinksapphiret2 and story from The Advocate in Louisiana , the Bayou Corne sinkhole is now 20X bigger than it was this time last year, and “it has taken on a volcano-like quality”. We KNOW for a fact that an ancient volcano was in the area as shared in this story and the must watch 2nd video below. With the area receiving many recent tremors, has the ‘Louisiana Sinkhole Volcano’ come back to life again?

John Boudreaux smelled petroleum in the air when he arrived at work at 5:30 a.m. on Aug. 3 of last year.

More than two months into an emergency response for unexplained bayou bubbles and tremors, Boudreaux was working in Bayou Corne at a command post set up to investigate the mysterious goings-on that had baffled residents, Assumption Parish officials and state regulators.

Initially called a “slurry hole,” the sinkhole had emerged sometime overnight after months of stirrings deep underground, pulling mature cypress trees straight down under a surface of floating mats of grass, mud and crude oil.

Since that day, one year ago Saturday, the 24-acre sinkhole has grown by a factor of more than 20 and taken on a volcano-like quality. The sinkhole has dormant periods and active periods, when tremors increase and methane and an emulsified oily gunk are released from deep natural deposits.

Soul Deceiver. The world adores him, but secretly, he is luring their souls on a one-way ticket to hell. If you like action, suspense, and mystery, check out Lyn Leahz’s Best Seller, Soul Deceiver, BOOK ONE in the fast-paced Eternal Soul Series. Recommended by Walid Shoebat & Joel Richardson .. It’s a page turner! CLICK BOOK PHOTO to find out more!

Like Loading...
‹ If Jesus Christ walked the Earth today, would you follow him?
Going to extremes: Breathtaking images of thrill-seeking action sports enthusiasts by photographers vying to win Red Bull contest–Includes HD video at bottom ›