Note from Lyn: Something interesting sent to me by a reader. With all that is going on with the sun, I thought this was interesting to share.

And I beheld when he had opened the sixth seal, and, lo, there was a great earthquake; and the sun became black as sackcloth of hair, Rev 6:12
Luke 21:25-27 And there shall be signs in the sun, and in the moon, and in the stars; and upon the earth distress of nations, with perplexity; the sea and the waves roaring; Men’s hearts failing them for fear, and for looking after those things which are coming on the earth: for the powers of heaven shall be shaken. And then shall they see the Son of man coming in a cloud with power and great glory.
NASA says that something unexpected is happening on the Sun.

NASA WARNING ON SUN: ‘Something unexpected is happening there’…
Years ago I read about the problem of missing neutrinos from the sun. Scientists attempting to understand what was going on in the suns core were shocked to find that two-thirds of the expected neutrinos were missing. They measured neutrinos because It takes thousands of years for photons that are created in the sun’s core to come to the surface and radiate out. Neutrinos only take minutes to come to the surface and reach the earth. 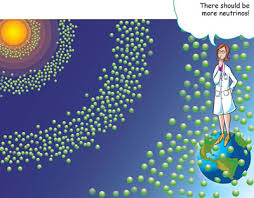 “Neutrinos are created as a result of certain types of radioactive decay, or nuclear reactions such as those that take place in the Sun…
Neutrinos do not carry electric charge, which means that they are not affected by the electromagnetic forces that act on charged particles such as electrons and protons. Neutrinos are affected only by the weak sub-atomic force, of much shorter range than electromagnetism, and gravity, which is relatively weak on the subatomic scale. Therefore a typical neutrino passes through normal matter unimpeded…
Most neutrinos passing through the Earth emanate from the Sun. About 65 billion (6.5×1010) solar neutrinos per second pass through every square centimeter perpendicular to the direction of the Sun in the region of the Earth.” 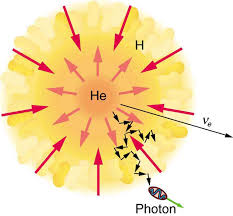 Here is the standard explanation for this:
“Starting in the late 1960s, several experiments found that the number of electron neutrinos arriving from the Sun was between one third and one half the number predicted by the Standard Solar Model. This discrepancy, which became known as the solar neutrino problem, remained unresolved for some thirty years. It was resolved by discovery of neutrino oscillation and mass. (The Standard Model of particle physics had assumed that neutrinos are massless and cannot change flavor. However, if neutrinos had mass, they could change flavor, or oscillate between flavors).” http://en.wikipedia.org/wiki/Solar_core
However, there are some scientist who say it has not been solved:
Stellar Nucleosynthesis
“The complete absence of solar neutrinos coming from the Sun 100% falsifies the fusion
mathematical model of the Sun. Instead of throwing out the fusion model, the authority
agreed to make more fantasy particles to plug the holes. These are collaterally known as
“epi-cycles”, which are additional things or motions invented to explain away
inconsistencies in a failed model that has many wrong root assumptions.”  Wolynski J. J. (2012). Ockham’s Razor Definition for Planet and Star
“Although the new results support our theoretical understanding of how the core of the Sun works, it challenges physicists in a profound way because these kind of neutrino transformations are not allowed in the so-called ‘Standard Model‘ of the electromagnetic and weak interaction. The results also provide some insights into cosmology because the number of neutrinos expected to exist in the universe is determined by Big Bang theory. If you multiply the expected numbers by the possible masses of these ‘oscillating’ neutrinos, you end up with neutrinos in the universe accounting for as much cosmological mass as all the visible stars in the universe. This is, however, far less than the dark matter component, so massive neutrinos still don’t account for this even greater mystery in astronomy.”  Dr. Sten Odenwald

What does this mean?
If the missing neutrinos indicate that the nuclear furnace at the core of the sun has gone out it would take a few years to start showing up. It would not take thousands it would only take a few years. Is this what we are seeing?

Like Loading...
‹ Are You Ready To Fall Apart?
Oklahoma AG Scott Pruitt Not In A Haze Over EPA Haze Regs: EPA Sue and Settle Litigation Not Acceptable ›