“Signs of The Times” 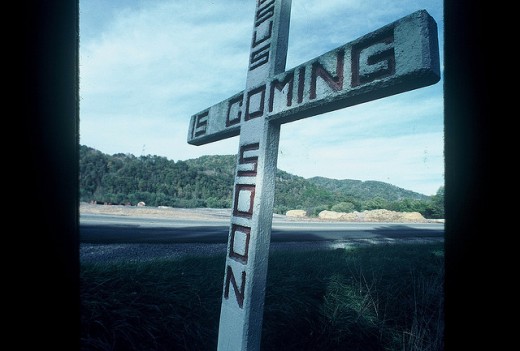 The “signs of the times” or “end time signs” are all around us.  Not only are they all around us, but, they are increasing in number and intensity each and every passing day.

The U.S. government is becoming fatter, hungrier and more powerful.  Government programs for entitlements are getting larger.  Military intervention and intimidation around the world is pervasive.  The government is supporting Muslim terrorists and the Muslim religion of Islam, while at the same time, outwardly denigrating Christianity and Jesus not only in America but, throughout the globe.

City police forces are becoming militarized.  What for?  The police used to be the police, now they are an armed military force in themselves.  There must be a reason for the sudden onset of such a buildup in weaponry.

The American economy is unstable to say the least.  The signs of a coming economic collapse are here.  The drastic increase in job loss, unemployment, food stamps and welfare, housing sales in decline.  The record high DOW Jones market is over-inflated and held up by air.  There is no reason for the market to be at such high levels.  How long will it be before that bubble bursts?

Banking Bailout.  The American government bailing out “Too Big to Fail” banks.  The European Union recently bailing out Cyprus banks and the depositors “bailing-in” against their will.

Morals and values have taken a turn 180 degrees.  What was once good is becoming bad, and what was bad is becoming good.  Being a Christian used to be thought of as a good thing, now Christians are persecuted, imprisoned, tortured and murdered for their faith.  Islam, which  teaches to hate, torture and murder is now thought of as a “good” religion.  Islam is now being accepted and supported throughout the world.  Islam will take a huge part in the end times.  They love to behead people.  The bible tells us that in the end times, Christians will be persecuted and beheaded for Jesus’s name sake.

Crime in America and around the world is increasing dramatically, as well as the severity of the crimes.  Murder is now a common household word.  Rapes are increasing as well.  Hate crimes, especially against white Americans are occurring everyday.  Mobs, protests and riots are taking place as we speak throughout the world.

Severe weather patterns are not merely an unusual event, instead they are, it seems a daily occurrence.  Thunderstorms, tornadoes, hurricanes and hail storms around the world.  Record breaking temperatures, rainfall and flooding.  Record breaking droughts and no rainfall in other areas.

Earthquakes in various places are increasing around the globe, causing major destruction and death.  Volcanoes once dormant, are awakening spewing lava and ash into once safe havens.

Visions and Dreams increasing.  The reports of people having dreams and visions of future events is also increasing.  The bible says that in the last days young men will have visions and old men will dream dreams.  I know for a fact this is happening, I myself have had many visions and dreams, and I have spoken to others who have as well.

Diseases and Plagues.  There shall be an increase in disease and plagues.  There are now many diseases that are infecting people, that were once nonexistent or dormant.  These diseases are now infecting many people, spreading and killing.  Locust plagues are occurring in Africa and the Middle East, destroying crops.

Honey Bees dying off in the millions.  Recently, millions if not billions of honey bees used to pollinate our crops in America, have died off.  This is a major concern, which could lead to catastrophe and a major food shortage.

Christian Persecution in the World.  Christians around the world are being, persecuted, imprisoned, tortured and murdered.  Where is the outcry and support from any government?  Where is Obama and his administration why all of this is going on?  Where is the European Union?  Where is the United Nations?  If Muslims or Islam is attacked, the world sits up and takes notice, supporting them and their religion, when Christians are attacked, it is swept under the rug.

Israel becoming a Nation.  We already know this has been fulfilled in 1948, and Jerusalem came under Israeli control in 1967.

Gospel Spread Throughout the World.  Matthew 24:14 “And this gospel of the kingdom will be preached in the whole world as a testimony to all nations, and then the end will come.”  This does not need to happen before the rapture of the church.  This is before “the end”, the second coming of Christ, which is different from the “rapture”.

With this being said, I believe in a pre-tribulation rapture of the church.  There is nothing left that needs to occur before this to take place.  The rapture could happen at anytime.

If you do not believe in a pre-tribulation rapture, then these signs are all leading to the beginning of the “Tribulation” period.  This could also happen at anytime.

Therefore, we need to be ready.  We need to be prepared.  For Christ could come at any moment.  Make sure that you are truly saved.  Accept Jesus now as your personal Lord and Savior.  God Bless!