Home › Bible Prophecy › Mideast peace talks to begin this week. But why did Israel approve release of 104 terrorists?

Mideast peace talks to begin this week. But why did Israel approve release of 104 terrorists? 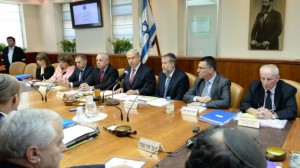 On Sunday, Israel’s cabinet approved the release of 104 Palestinian terrorists. Why?

(Washington, D.C.) — A new round of Middle East peace talks are set to begin Monday and Tuesday evenings here in D.C. That’s a hopeful sign. There haven’t been face-to-face negotiations between senior Israeli and Palestinian officials in years.

But why are they beginning with the Israelis agreeing to release 104 convicted Palestinian terrorists?

Palestinian leader Mahmoud Abbas refused to agree to the talks unless Israel made a big concession. Abbas pressed hard for the release of convicted terrorists as one of those concessions. But why? Do you convince your interlocutors — or the rest of the world — that you really want peace by insisting on the release of Arabs who have murdered Israelis? Hardly.

That said, it’s bad enough that Abbas insisted on such a thing, but why exactly did the Israeli government say yes? These are hardened criminals. These are convicted criminals. These are criminals with blood on their hands. Why not agree to a different Abbas demand, like freezing settlement construction for a few months? Or not agree to any preconditions, like Netanyahu has been saying for the last three years? If you’re going to give some ground (and sometimes making a goodwill gesture is wise), why then make the release of 104 terrorists your first priority?

It makes no sense to me.

I want to see Israelis and Palestinians make peace. I want them to make goodwill gestures towards each other. I want the ice to thaw. But I don’t want to see murderers released. That won’t lead to peace, only to more terrorism.

But that’s what Israel just did. Here are the details.

“The [Israeli] cabinet paved the way on Sunday for negotiations with the Palestinians to start informally in Washington on Monday, as it voted 13-7 to approve the talks and empower a ministerial committee to release 104 Palestinian prisoners over the next nine months,” reports the Jerusalem Post.

“Justice Minister Tzipi Livni, who heads the Israeli negotiating team, and Prime Minister Binyamin Netanyahu’s envoy Yitzhak Molcho left Sunday evening for the U.S.,” notes the Post. “They were expected to hold a preliminary meeting Monday at US Secretary of State John Kerry’s home with Palestinian negotiators Saeb Erekat and Mohammad Shtayyeh, and then begin the negotiations in earnest on Tuesday. Kerry phoned Netanyahu and Palestinian Authority President Mahmoud Abbas Sunday evening to extend a formal invitation to the talks. According to a statement put out by the State Department, the meetings will ‘serve as an opportunity to develop a procedural work plan for how the parties can proceed with the negotiations in the coming months.’”

“The decision to approve in principle the release of prisoners – and to set up a ministerial committee empowered to determine when and which prisoners will be released — came at the end of a nearly six-hour, sometimes emotional, cabinet meeting.:

Cabinet Ministers who voted against releasing the Palestinian terrorists:

Cabinet Ministers who voted for the proposal:

The Times of Israel reported some key details: