Home › Christian History › The Church God Spit Out of His Mouth

The Church God Spit Out of His Mouth 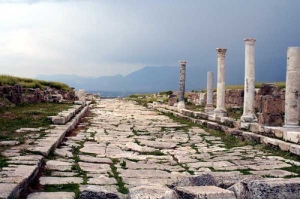 Did you know that out of the seven churches listed in Revelations 2-3, that the church of Laodicea, was the only church God said nothing positive about? All the others received some type of positive report, and some negative too, but this church was the only one that received a solely negative report. Check it out…

1. To the Church in Ephesus he said this good thing about them, “I know your deeds, your hard work and your perseverance. I know that you cannot tolerate wicked people, that you have tested those who claim to be apostles but are not, and have found them false. You have persevered and have endured hardships for my name…” (Rev. 2:2-3). He goes on to say negative stuff also, but he starts with positive.

2. To the Church of Smyrna he says this good thing, “I know your afflictions and your poverty… Do not be afraid of what you are about to suffer. I tell you, the devil will put some of you in prison to test you, and you will suffer persecution for ten days. Be faithful, even to the point of death, and I will give you life as your victor’s crown. ” (Rev. 2:9-10)

3.  To the Church of Pergamum he says this good thing, “I know where you live—where Satan has his throne. Yet you remain true to my name…” (Rev. 2:13) He goes on to state he has a few things against them, but once again he lists a positive.

4. To the Church of Thyatira he says this good thing, “I know your deeds, your love and faith, your service and perseverance, and that you are now doing more than you did at first.” (Rev. 2:19) He goes on to state a few things he has against them, but yet again lists a positive.

5. To the Church of Sardis he says this good thing, “you have a few people in Sardis who have not soiled their clothes. They will walk with me, dressed in white, for they are worthy.” (Rev. 3:4) He also states some negative stuff about the church, but it included positive.

6. To the Church of Philadelphia he says this good thing, “I know your deeds. See, I have placed before you an open door that no one can shut. I know that you have little strength, yet you have kept my word and have not denied my name.” (Rev. 3:8)

Each of these six churches had something positive written about them, however, when we arrive at the last church, The Church of Laodicea, God gives no positive input, rather he says this is the church he will, ‘spit out of his mouth.’  Why? Why did this church get no positive and only a negative report. Well after some digging I found my answer…

“To the angel of the church in Laodicea write:…I know your deeds, that you are neither cold nor hot. I wish you were either one or the other! So, because you are lukewarm—neither hot nor cold—I will spit you out of my mouth.” Revelation :3:14-16

God describes the lukewarm nature of the church, the same as the lukewarm waters from which they were drinking. In other words the Laodicea Christians lived a very complacent Christian lifestyle. So much so, that God himself wished that they were either hot or cold (with him or against him) rather than ‘on the fence.’

There are few things in life worse than spiritual complacency. But to the Laodicea’s it was a way of life. The city was rich and had need of nothing. Things were easy, they had food to eat, a roof over their heads, medical, and they were well taken care of.  As a result they became complacent  and didn’t have need of God.

“You say, ‘I am rich; I have acquired wealth and do not need a thing.’ But you do not realize that you are wretched, pitiful, poor, blind and naked. I counsel you to buy from me gold refined in the fire, so you can become rich; and white clothes to wear, so you can cover your shameful nakedness; and salve to put on your eyes, so you can see. Those whom I love I rebuke and discipline. So be earnest, and repent. Here I am! I stand at the door and knock.” Revelations 3:17-19

“To be satisfied with where you are spiritually is to commit spiritual suicide!”

If you are not moving towards God, then you are moving away from him. There is no in-between. Its either one or the other.

This is exactly what the church of Laodicea was doing, and what many Christian churches are doing today.  We live in a lukewarm generation, with a lukewarm church, and I believe, we are like the Laodicea church.

“So, because you are lukewarm—neither hot nor cold—I will spit you out of my mouth.” Revelation :3:16

Being lukewarm is disgracefully distasteful to God.  He even goes as far as saying he will ‘spit that church out of his mouth.’ These are powerful words coming from our Lord. I mean think about it, if something is distasteful to us, we might take a bite of the food, but the second it gives us the repulsing taste, we’ll hack it up, spit or vomit it in the trash, and dash to the bathroom to re-cleanse our mouths.  This is how God feels about people being lukewarm and complacent.  It makes him sick and it makes him vomit.

In truth, people who are complacent eventually drift away from the Lord into a lukewarm lifestyle. So be aware of where you stand, and know that being lukewarm does not buy you a ticket into heaven.

“[Church of Laodicea]…If anyone hears my voice and opens the door, I will come in and eat with him, and he with me. To him who overcomes, I will give the right to sit with me on my throne, just as I overcame and sat down with my Father on his throne.” Revelation 3:20-21

The great news is, God gives an open invitation to the complacent church in Laodicea. He invites them to come back to him, sit with him on his throne and overcome, just as Christ has overcome. In other words, start seeking God again with all your heart. If you are satisfied with where you are spiritually, check your life. You don’t want to be moving away from God or be stagnant, but rather move towards him, continually upwards.  And for those of you who are holding fast, persevere and continue to seek him.  Don’t be like the church that God, ‘spits out of his mouth.’ Rather, be an overcomer.