Egyptian President Mohamed Morsi has stood firm on defending Palestinian interests in the Gaza Strip while not jeopardizing a peace treaty with Israel. 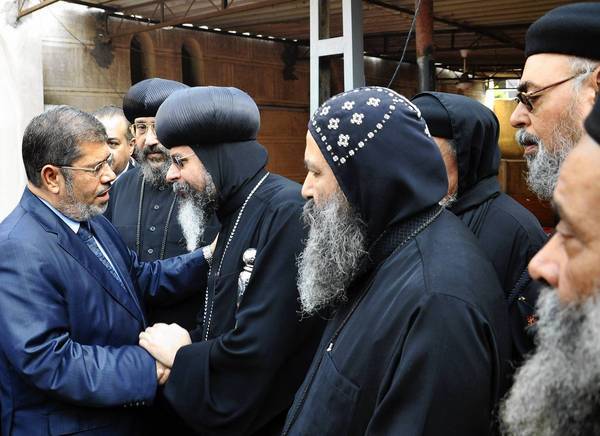 CAIRO — The Gaza conflict has pressured Egyptian President Mohamed Morsi on many fronts: Each rocket Hamas fired into Israel has been a test of Morsi’s loyalty. Israeli Prime Minister Benjamin Netanyahu has also been gauging how much damage he can inflict on Hamas before Morsi responds with more than public statements and diplomacy.

And the United States and the West, the source of billions of dollars in aid and possible investment that Egypt desperately needs, are watching to see whether the Egyptian president emerges as a formidable and trusted regional voice.

Morsi supported Hamas years before he became Egypt’s president, but his efforts to persuade the militant group to agree to a cease-fire are central to his ambition to emerge as an Islamist leader capable of navigating the Middle East’s many tinderboxes.

The fighting between Hamas and Israel has put Morsi’s new government in the spotlight, testing his influence with Hamas and his international stature. Hamas, for its part, exploited its close ties to Egypt’s Muslim Brotherhood to press its case in an Arab world reshaped by uprisings and revolutions.

Morsi has stood firm on defending Palestinian interests in the Gaza Strip while not jeopardizing Egypt’s 1979 peace treaty with Israel, a cornerstone of stability. It is a sensitive task for a man new to the slipstream of world affairs.

“Israeli aggression will end today, Tuesday, with no compromises or surrender,” the state news agency quoted Morsi as saying while United Nations Secretary-General Ban Ki-moon held talks in Cairo on a possible cease-fire.

Despite expressions of optimism that an agreement to end the fighting was close, talks dragged into Wednesday with no announcement. But the Egyptians felt that they were redefining their role as a prominent player in the Arab-Israeli peace process.

“Egypt is like Palestine’s big brother in this situation. Israel tried to ridicule Egypt in front of its little brother and they got a reaction they were not expecting,” said a Morsi confidant who asked not to be named because of the sensitivity of the cease-fire talks.

“Israel is trying to show Palestine, Hamas and the world that nothing has changed in Egypt’s reaction and that they can still do what they want,” the confidant said. “But this is no longer applicable and they are shocked.”

Morsi’s tenor through the last week has been markedly different from that of his predecessor, Hosni Mubarak, who was suspicious of Hamas and was criticized for tilting toward Israeli interests. Mubarak closed the border crossing with Gaza and blamed Hamas for exporting terrorism to Egypt. Morsi, however, immediately sided with the Palestinians, withdrawing Egypt’s ambassador to Israel and dispatching his prime minister to Gaza in a show of solidarity.

Morsi’s Muslim Brotherhood inspired the founding of Hamas and the two share religious ideologies and a desire to outmaneuver Israel and secure an independent Palestinian homeland. But Morsi, who once referred to Israelis as vampires, is also tempering his Islamist passion with the pragmatism that comes with his shift from onetime dissident to president of Egypt.

This is not without risks. Morsi’s backing of Hamas “threatens Egypt’s external and internal politics,” said Said Okasha, an Arab-Israeli expert at Al Ahram Center for Political and Strategic Studies. He said Egyptian public opinion demands that Morsi side with the Palestinians, but not to the extent of isolating Israel or endangering Western investment.

Hamas celebrated when Morsi was inaugurated in June, ending three decades of autocratic rule by Mubarak. Ties between Cairo and Gaza have strengthened even as the Muslim Brotherhood and Hamas have evolved differently: Hamas represents a virulent strand of militant Islam with ties to Iran while the once-oppressed Brotherhood has risen to power through elections.

“The relationship between Hamas and Egypt now is very strong. Hamas is the extension of the Muslim Brotherhood,” said Mustafa Labbad, director of Al Sharq Center for Regional and Strategic Studies. “Mubarak is not there and they see Egypt as a guarantor with a leader closer to them than to Israel. It is a victory for Hamas.”

Morsi’s other dominant concern is keeping peace in the Sinai Peninsula, which abuts Gaza and Israel. A ground war in Gaza would probably send streams of refugees into an Egypt already under strain from a poor economy and shortages of gas, water and other essentials. The welcome Palestinians received from Egyptians during the 2009 war was short-lived.

Tribal leaders in the Sinai also have blamed Hamas and rival Palestinian groups for aiding the reemergence of extremist networks that have killed Egyptian soldiers and border guards. Stability in the Sinai is crucial for Israel, which fears that militants will launch attacks from the desert region.

Such a scenario might rouse the Egyptian military, which Morsi sidelined from power in August when he forced the resignations of top commanders, including Field Marshal Mohamed Hussein Tantawi.

The military, which receives about $1.3 billion in U.S. aid and has been essential to upholding the peace treaty, has been blamed for not crushing the radicals. But it could intervene if it sensed Morsi and the Brotherhood, especially the organization’s conservatives who want a harsher line on Israel, were jeopardizing the treaty in support of Hamas. That does not appear to be the case now.

“Everyone agrees on the need for a cease-fire,” said Labbad. “It’s not an easy task, but the window of opportunity is opening. Egypt is not interested in violence and struggle. It wants to upgrade its regional papers [status] from the era of Mubarak that achieved nothing.”

Abdellatif is a news assistant in The Times’ Cairo bureau.