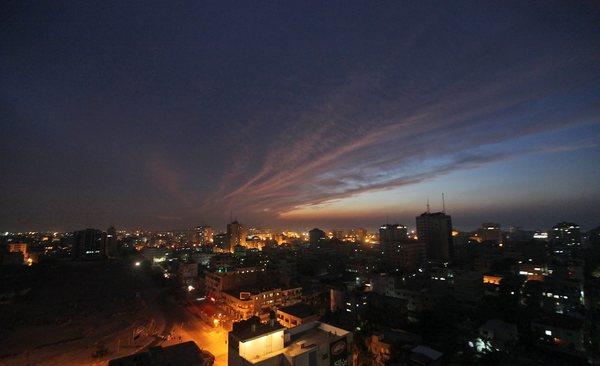 By Jeffrey Fleishman and Reem AbdellatifNovember 21, 2012, 11:42 a.m.
CAIRO — Hamas and Israel agreed to a cease-fire that took effect Wednesday evening following a week of intense diplomacy to stop rocket fire and airstrikes that have pounded the Gaza Strip and Israel and raised fears of plunging the region into a wider war.
The truce began at 9 p.m. local time and appeared at least initially to be taking hold.
The deal was announced in Cairo by Egyptian Foreign Minister Mohamed Amr and Secretary of State Hillary Rodham Clinton, who flew to the region Tuesday night as hopes for a truce remained elusive amid heavy artillery exchanges.

“After intensive efforts, calls and negotiations with the Israelis and factions of the Palestinian resistance, we have come to an understanding,” Amr said.

Clinton said: “The people of this region deserve to live in peace and safety,” adding that she had discussed with Egyptian President Mohamed Morsi “how Egypt and the U.S. can support this process.”

In Washington, President Obama thanked Morsi for his efforts “to achieve a sustainable cease-fire and for his personal leadership in negotiating a cease-fire proposal.”

It was unclear how the deal would be enforced. It calls for Israel to stop all bombardment — from land, sea and air — of the Gaza Strip and for Hamas to halt firing rockets into Israel. It also notes that Israel should stop “incursions and targeting of individuals.”

The agreement also stipulates that issues related to border crossings and the movement of people and goods will “be dealt with” 24 hours after the start of the cease-fire.

The truce did not calm the deep animosities in the region, but it eased fears that there would be a repeat of the 2009 ground war that saw thousands of Israeli troops storm Gaza.

The current hostilities laid bare a new era of politics arising from the Arab uprisings of the last two years that, notably in Egypt, swept pro-Western autocrats from power and elected Islamist-dominated governments. Morsi faced pressure from the U.S. and Israel to use the connections Egypt’s Muslim Brotherhood has with Hamas to fashion a truce.

Neither Israel nor Hamas — despite days of vitriolic rhetoric — appeared to want to enter a protracted conflict.

The ordeal suggested that Hamas was testing the loyalties of Egypt and other Arab governments, and that Israeli Prime Minister Benjamin Netanyahu, who faces reelection soon, was gauging how far he could push hostilities in a region increasingly driven by an Islamist agenda.

The negotiations drew Cairo and Washington closer and marked the end of three decades of foreign policy by deposed Egyptian leader Hosni Mubarak, who was often criticized for siding with Israeli interests over those of the Palestinians.

The Egyptian government was elated, believing that it had pulled off a huge success as the world watched whether Morsi, an untested politician until his inauguration in June, was formidable enough to secure a deal.

“Egypt is rising to its role; it has retrieved its influence in the region and world,” said Ahmed Sabea, spokesman for the Muslim Brotherhood’s Freedom and Justice Party. “This achievement will be credited to President Morsi and the Egyptian revolution.”