REVELATION SIX–THE OPENING OF THE SEALS! 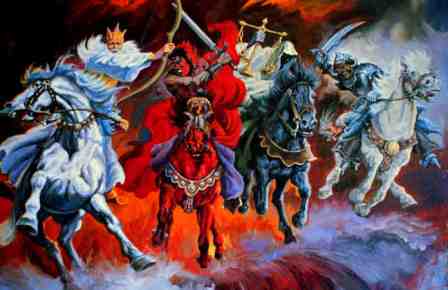 6 And I saw when the Lamb opened one of the seals, and I heard, as it were the noise of thunder, one of the four beasts saying, Come and see.

2 And I saw, and behold a white horse: and he that sat on him had a bow; and a crown was given unto him: and he went forth conquering, and to conquer.

4 And there went out another horse that was red: and power was given to him that sat thereon to take peace from the earth, and that they should kill one another: and there was given unto him a great sword.

5 And when he had opened the third seal, I heard the third beast say, Come and see. And I beheld, and lo a black horse; and he that sat on him had a pair of balances in his hand.

6 And I heard a voice in the midst of the four beasts say, A measure of wheat for a penny, and three measures of barley for a penny; and see thou hurt not the oil and the wine.

7 And when he had opened the fourth seal, I heard the voice of the fourth beast say, Come and see.

8 And I looked, and behold a pale horse: and his name that sat on him was Death, and Hell followed with him. And power was given unto them over the fourth part of the earth, to kill with sword, and with hunger, and with death, and with the beasts of the earth.

9 And when he had opened the fifth seal, I saw under the altar the souls of them that were slain for the word of God, and for the testimony which they held:

10 And they cried with a loud voice, saying, How long, O Lord, holy and true, dost thou not judge and avenge our blood on them that dwell on the earth?

11 And white robes were given unto every one of them; and it was said unto them, that they should rest yet for a little season, until their fellowservants also and their brethren, that should be killed as they were, should be fulfilled.

12 And I beheld when he had opened the sixth seal, and, lo, there was a great earthquake; and the sun became black as sackcloth of hair, and the moon became as blood;

13 And the stars of heaven fell unto the earth, even as a fig tree casteth her untimely figs, when she is shaken of a mighty wind.

14 And the heaven departed as a scroll when it is rolled together; and every mountain and island were moved out of their places.

16 And said to the mountains and rocks, Fall on us, and hide us from the face of him that sitteth on the throne, and from the wrath of the Lamb:

17 For the great day of his wrath is come; and who shall be able to stand?

I am concerned as I am seeing things all over the world that coincide with the opening of the seals.  We know that the person who will become the Antichrist is alive in this world now.  The first seal is the description of the Antichrist..not Jesus.  Thus as to why he is handed a ‘bow’ and arrow, and a crown is ‘given’ to him.  Jesus Christ already has a crown.  The first seal is the great deceiver.

The second seal I am also seeing.  Those of us who live in America sometimes think everything must happen here in order for prophecy to be fulfilled.  Not so.  Christian persecution has increased greatly last year, and this year both.  This year, more than any other, there has been more chaos and disasters as never before recorded in history.  As a side note, just an interesting thing, NASA picked up the distinct image of a red horse made of fire emerging from the sun.  I looked at the image myself and it was clearly a perfectly shaped red horse.  I posted the video not too long ago that had this image in it.  Some of you may remember it.

The third seal we know will happen soon…the economic collapse.  The balances in his hand..do not hurt the oil or the wine!  Obama just said this himself..not in those words… see here please http://jpfinn7.wordpress.com/2012/11/10/leader-by-deception/  In his own words, by definition, the rich will not be hurt!  Friends, that is who the “oil and the wine” are in this passage..the rich!

I am not trying to offend you.  I am not trying to spread any false doctrine.  We have all depended on prophecy scholars for many years to explain things to us from the book of Revelation.  I am no different from them..it’s just that we have all heard them first..and that is what sticks with us.  Prophecy scholars have been wrong before.  If I take you all back to the eighties, they believed the number 666 would be stamped on our foreheads, for example.  They used to think the leg of the statue in the Daniel account was Rome, now they have realized it is Islam.  Sometimes, as things happen, we realize, “Ooops!  We were wrong on this one point..”

The author of the book, “The Window of the Lord’s Return,” by John Shorey, http://TribulationTruth.com also asserts to the same thing I am saying here…  I am not opposed to studying scripture and different people’s views on Bible prophecy.  We should study!  We are told in the Bible to study!  John Shorey’s book, I must say, gives the best description, backed up by scripture, that I have ever heard regarding Bible Prophecy, the tribulation, and so forth.  I encourage everyone just to give it a read and tell me what you think.  It’s not expensive. I ordered it. You can only order it from his website.  I want to hear your feedback.  What do you have to lose?

Let’s all open our eyes and pray about this.  If we are indeed seeing the seals opened, we need to pray fervently about some things we’ve not yet prayed for.  I send you this message in love and care.  God has weighed it on my heart to write this to you today.  If we remain ignorant and don’t research this ourselves…we are not going to be prepared!  There will be many brothers and sisters who are without food and water..and who might be tempted to take the mark as a result.  Their children won’t be able to get medical care..nor will they.  They will not be able to buy food without it..having no stores of food, they will be devastated to watch their child/children/husband/wife/parent/etc. starving to death.  Do you see what I’m saying?

If we must be here for the seals, we need to search everything that is going on, and God’s Word…and our hearts through prayer and supplication…and find out for sure so that we and our loved ones will not be in a difficult situation.  Let’s not just put our trust in what we’ve heard over the years through people.  Let’s open our eyes and find out ourselves.  I don’t know about you, but I don’t want to just depend on the fact that, “Oh, it’ll all be okay because Pastor So and So said it doesn’t happen that way…”  Okay, so what if Pastor So and So is wrong…what are you going to do?  What will Pastor So and So do for you then?  Is he going to show up on your doorstep with a bag of food and water saying, “Ho! Ho! Hol!  It’s Pastor So and So!”  I don’t think so.

I’m not trying to say positively that this is what is going on.  What I am saying is that I’m deeply wondering…and as believers in Christ, we should all be wondering.  Can you deny the things that have taken place this year alone?  I can’t.  There’s one thing we all know for sure.  We love the Lord,  He loves us, Jesus died for us and was raised again. We will, at some point, be with Him and our loved ones who have gone before us.  We don’t know for sure every single thing in the book of Revelation what it means.  There are many things prophecy scholars to this day don’t for sure about it.

Let’s not be ignorant about this and get our feathers ruffled.  I am just trying to open your eyes to what is going on right now, and the possibility that we could indeed be seeing the opening of the seals.  You decide for yourself.  All I ask you to do is to study God’s Word, ponder this year’s events, pray about it, and if you can, get the book I mentioned above and gave you the link to…The Window of the Lord’s Return…and after you read it and pray about it, please give me your thoughts.  I read it,  like I said, and desire to hear your feedback.

God bless you. I look forward to your comments.  Please don’t be rude.  I posted this for three reasons: I love you.  God loves you even more.  The Holy Spirit urged me to do so.  I will admit, He has been bugging me to post this message now for a while, but I have put it off because I didn’t want to.  I receive much persecution on a regular basis from people, mostly Christians, so I was not wanting to deal with that.  That is wrong, and I have repented for it.  So here you go.

If you haven’t seen these videos, watch them.  Add to this video, as you watch, the things that  have happened since it was made–Hurricane Sandy, the flooding in Africa, Italy, etc. The first video is more recent than the second, but they both have some different things in them.

Like Loading...
‹ Citizens from 15 states have filed petitions to secede from the United States
Latest developments: 160 rockets fired at Israel, and more shelling on Israeli-Syrian border ›