WASHINGTON, DC, October 29, 2012 (LifeSiteNews.com) – Shield of Roses, the student pro-life group at Virginia’s Christendom College, held its biggest abortion protest in the 35 years of its existence this past Saturday.

On October 27, over 225 students, faculty, staff, and visitors traveled to Washington, D.C., to peacefully protest abortion at the Planned Parenthood clinic, located just north of the White House, on 16th Street.

“I am so happy that we were able to get so many to come out for this event,” said President of Shield of Roses, college senior Chris Roberts. “It’s a real sacrifice to wake up so early on a Saturday morning and travel to D.C., but the babies are worth it.”

Christendom’s Shield of Roses pro-life group has been organizing prayerful pro-life protests since 1977, the first year of the college’s existence. In the 1980s and 1990s, the students targeted an abortion clinic in Falls Church, Virginia. For the past 12 years, the group has focused on the Planned Parenthood clinic in D.C.

The group protests at this same clinic each Saturday morning during the academic year, but normally only around 20 students make the trek into D.C. on a weekly basis.

Once a semester, however, Shield of Roses leadership organizes what it calls a “Mega Shield” event and encourages as many of the members of the College community as possible to participate. Last year, Mega Shield events drew as many as 100 students, and prior years saw up to 200 participants.

Students wake up early on “Mega Shield” Saturdays to attend the 7:30 a.m. Mass, after which they load into private vehicles and college vans for the 75 mile drive to Washington. They 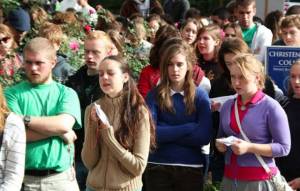 arrive at the Planned Parenthood abortion facility at around 9:30 a.m. where they kneel on the grass in front of the clinic and pray four rosaries and a Chaplet of Divine Mercy, as well as sing some Marian hymns, before heading back to the college campus in Front Royal.

In 2010, Shield of Roses organizers found that this particular Planned Parenthood facility had erected a fence blocking access to the public lawn in an effort to deter the protesting students from standing and kneeling on the grassy area.

Later that year, research by the American Center for Law and Justice (ACLJ) determined that the grassy area and sidewalk in front of the building are public property, to which Planned Parenthood no right to restrict access.

As a result, students are now able to kneel and pray on the public lawn again.

Tom McFadden, Christendom’s Director of Admissions, told LifeSiteNews that the Mega Shield event is “a great opportunity for students, who may never have seen the face of abortion, to participate in a prayerful gathering to promote the culture of life.”

The students of Christendom College are active in pro-life work year round, from prayerful protests to volunteering at a pregnancy center and working for pro-life candidates. Every year, Christendom cancels classes the day of the March for Life in D.C. and the entire student body enthusiastically attends.