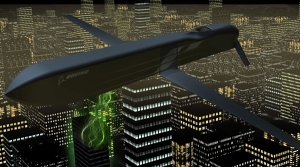 A pre-programmed cruise missile not too different from a drone has been proven to be capable of blasting out an EMP-type microwave that was able to destroy personal computers and electrical systems inside a building over which it was flying.

The U.S. Air Force and its contractor Boeing have created the High-powered Microwave Advanced Missile Project, or CHAMP, which was just tested over a Utah desert.

It’s a project of Boeing’s Phantom Works team and the U.S. Air Force Research Laboratory Directed Energy Directorate, along with Raytheon Ktech, which supplied the high power microwave, or HPM.

The action of the high power microwave has the same effect as an electromagnetic pulse, or EMP, from either a high-altitude exploded nuclear weapon or a massive solar storm, but not with their intensity.

The cruise missile, which was launched from a U.S. bomber, was pre-programmed to fly over a target and shoot a burst of high power microwaves at a two-story building. It knocked out rows of personal computers and electrical systems which were shown in a video taken of the test.

Following the first target, the cruise missile then was guided to six other targets, resulting in knocking out all electronics.

“In the near future, this technology may be used to render an enemy’s electronic and data systems useless even before the first troops or aircraft arrive,” according to Keith Coleman, the CHAMP program manager of Boeing’s Phantom Works.

The cruise missile is equipped with a powerful magnetron that produces a massive pulse of microwave radiation. The magnetron is a high-powered vacuum tube that generates microwaves that uses the interaction of electrons with a magnetic field. It also is used in radars and microwave ovens.

The Air Force test showed that a non-lethal weapon can knock out multiple electronic targets without collateral damage. It has the same effect as a magnetic flux-compression generator, or MFCG, bomb which can produce electrical energy of some tens of Mega Joules in just tens of microseconds in a relatively small package.

In effect, the MFCG is a directed electromagnetic pulse gun that has military application as its primary use.

All of this also is similar to another U.S. Air Force-developed weapon based on a type of radar called the active electronically scanned array, or AESA.

An ASEA acting as normal radar broadcasts microwaves over a wide area. However, all of its energy can be focused on a single point. A beam from an ASEA basically scrambles electronic components of a target, similar to the effects of an EMP from a nuclear detonation when it fries all electronics.

Depending on the ASEA’s strength, it can scramble the electronics of an offensive target at considerable distances without endangering the aircraft equipped with the ASEA radar.

There are large and small ASEAS. While the larger ones fit on ships, the smaller ASEAs fit in the nose of our latest jet fighters, such as the F-22 and the latest F-35 stealth joint strike fighter.

The EA-18G is in use by the U.S. Navy and is the cornerstone of the naval Airborne Electronic Attack, or AEA, mission.

Boeing’s CHAMP project is of a design similar to the company’s other cruise missile designs that are also air-launched and have a low-radar signature but is smaller with compressed carriage wings that extend out after launch.

“Any of these systems can be made to be recoverable or otherwise,” Coleman said. “There are many proven methods of recovering vehicles from the lightweights to the heavier designs.”

The training took place at the Utah Test and Training Range at Hill Air Force Base. While the beam was focused to virtually eliminate collateral damage to nearby electronic devices, the software used in the test reportedly was the same to trigger an HPM weapon warhead.

“Champ is a template for future HPM programs,” Coleman said. “There has never been this type of system with this kind of power out on any vehicle of any sort before.”

He added that there will be no problem putting HPM weapons technology on even smaller or larger airframes.

These developments have not gone unnoticed by other countries that are aware of the effects of EMP weapons and may be developing some of their own.

Iran, for example, has been flying unmanned aerial vehicles, or UAVs, over U.S. warships in the Persian Gulf for some time taking photos. They easily could be equipped with a magnetron to knock out the electronics on board the ships, since their UAVs are virtually stealthy.

Indeed, Iran has even admitted that it had used newly developed microwave technology to trick the electronics onboard the SQ-170 stealth U.S. drone which it claims it downed in November 2011 as it flew a spy mission from Afghanistan.

The SQ-170 was made to land in Iran with minimal damage. The Iranians then claimed to have deciphered the coded software and learned other secrets surrounding the SQ-170.

Esmaeil Kowsari, a member of the Iranian parliament and vice chairman of the parliament’s National Security and Foreign Policy Committee, contended that the Iranians brought down the drone through sophisticated hacking of satellites that controlled the drone.

“If it cannot, self-destruction is the ultimate choice,” he added. “Despite this, the Iranian electronic war hackers were not only able to hack the SAT controlling the drone and sever contacts with the Afghanistan base, but they were also able to simulate their base as the U.S. base for the plane and as the higher ranking base forced the plane to land without destroying itself, the artificial intelligent-based software did not even suspect that it is being controlled by the Iranian forces.”

As an indication that Iranian electronic measures may be aimed at U.S. forces in the region in retaliation, Kowsari warned that the Iranians will be undertaking electronic warfare against “all computer-based network systems in the U.S. and Europe.”

“Since the algorithm and logic behind other systems are much simpler, the Iranians may be able to control all radars, satellites, planes, ships, tanks, rockets, cruise missiles of the U.S. and NATO throughout the world,” he added. “They may be able to even control American soldiers, who are driven to fight using satellite controlled infrared systems.”

In suggesting that Iran could enter into such systems, Kowsari said the weapons could be deflected back to the “perpetrators” simply by hacking their systems.

While Kowsari didn’t say just how the hacking had been done, recent efforts on the part of Iranians suggest the hacking included the use of some kind of radio-frequency microwave weapon which isn’t surprising since the Iranians themselves have boasted of undertaking such research.

In fact, such information has been publicly available since 1999 to the Iranians and other countries that want to acquire information on RF weapons to counter stealth and cruise missile technology.

Like Loading...
‹ Watching the Trajectory of Hurricane Sandy, US East Coast Should Prepare
U.N. Human Rights Council Calls for Boycott of U.S. Companies That Support Israel ›