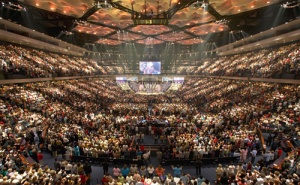 A Colorado Springs megachurch pastor became disillusioned when he began to follow on Twitter around a dozen high-profile pastors whose ministries he respected.

These pastors would regularly tweet something that was, in Pastor Brady Boyd‘s opinion, overflowing with hype. “Super Bowl of all Sundays,” “the megamonster of all sermons,” “I can’t think of another time I have been more excited about preaching a message,” they tweeted as they touted upcoming weekend services.

“How can it be, week after week?” Boyd, senior pastor of New Life Church, wrote in his newly released book Sons & Daughters.

Sadly, the result of hype is a church full of consumers.

“It would be easy to blame church congregations for the madness that has consumed our gatherings these days, except that from what I see from their pastors, we’re conditioning them to behave this way. We hype and promote and position and tweet and inadvertently create pews full of consumers instead of devoted worshipers of God,” Boyd stated.

“We hyp-ers are setting up our people to expect an experience, instead of teaching them to encounter their Lord.”

This all dates back to the 1950s, Boyd told The Christian Post. That is when pastors decided to grow a church by creating a product that’s easy to consume.

“We realized that if we could package the Gospel and church in a tidy little package then people would buy it better. That’s exactly what happened in America,” the 45-year-old pastor commented.

Over the years, the church has built marketing strategies and became leadership and corporate experts, borrowing practices from the entrepreneurial, capitalistic world.

The strategy worked. The number of megachurches has increased from less than a hundred before 1950 to a few thousand today.

Boyd, whose church has some 10,000 members, acknowledged that there isn’t an evil motive or intention behind all this. But churches have adopted a model he finds unsustainable.

“We’re adopting the world’s model to build God’s Church; it’s not a sustainable model,” he said. “These churches are built on marketing principles and not the Holy Spirit, in many cases. Or they’re built on both and you can’t combine them. It’s like oil and water.”

The Colorado pastor said he doesn’t want to be preoccupied with how to keep consumers happy. That’s not his goal. His goal each weekend is to “display passion that comes from having been in the presence of God, instead of the slickness that always surfaces when you’ve been sucked into the latest trend.”

Boyd offered a recipe for hype-free pastoring: prayer, reading Scripture, and giving spiritual direction to people in need. This forces the pastor to rely on the Holy Spirit and not on big personality.
Unfortunately, such a recipe isn’t celebrated in churches today.

Rather, what’s celebrated, he said, is the pastor who is going 100 miles an hour, writing books every year, and speaking at every conference – all while leading a church.

“I know so many pastors who are going so hard and so fast,” he told CP. “The pastors that scare me the most are those that don’t know how to slow down and have fun and laugh and relax. I’m around these type A, hard-driving, and they pastor small churches and big churches.”

And that’s what people are applauding, he lamented.

When was the last time we celebrated the contemplative or reflective pastors who are leading their congregations well, balancing their life and spending time with their families? Boyd posed.

In his new book, Boyd wants to convey to Christians the message that more than what you do, what matters to God is who you are.

Many Christians are living the exhausting life of a “slave” – working their way into God’s favor – when in reality, God has embraced them as sons and daughters.

Boyd admits that he was “the best Christian slave ever,” attending every event, volunteering for everything, and doing everything he could to be accepted by God.

But he came to realize one profound truth that he was missing for most of his Christian life – that God adopted him and calls him “son.”

Once you believe that you are the son or daughter of God, it changes everything, he said.

“We are accepted, approved, and adored. No amount of laudable effort can garner more favor than is already ours right now,” he wrote.

“Being a son or daughter takes so much pressure off you,” he explained to CP. “I could live the rest of my life without having to prove anything to anybody.

“I can be who I am. That’s when you’re most powerful.”

Like Loading...
‹ Christian Group Banned From University For Adhering to ‘Biblical Truths of Christianity’
Navy’s Laser Arsenal Is Just Two Years Away ›