“It did frighten me. I was slobbering, crying, sweating. My cheeks blew up. I was purging. It was almost too intense. It almost drove me away.” -Denzel Washington

In a recent interview with GQ magazine, outspoken Christian Denzel Washington shared about a spiritual experience he had during a service at West Angeles Church of God in Christ, the church he still attends.
It happened thirty years ago when the preacher was preaching about just “letting go,” and Washington decided to do just that.
“I had this tremendous physical and spiritual experience,” said Washington. “It did frighten me. I was slobbering, crying, sweating. My cheeks blew up. I was purging.”

“It was almost too intense,” he said. “It almost drove me away. I called my mother, and she said I was being filled with the Holy Spirit. I was like, ‘Does that mean I can never have wine again?'”
Click on the link provided to read more about Washington, his career, his family, and his politics.

GQ’s Michael Hainey sits down with  two-time Oscar  winner and box-office giant Denzel Washington to talk about his first jobs, how  his father influenced him, and why he won’t question his mojo 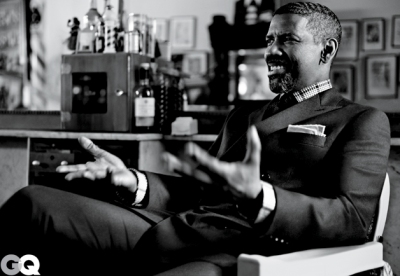 Denzel Washington walks like a cat strutting atop a  high ledge. One foot in  front of the other, lightly. Head pulled down, slightly. Eyes watching  everything. There’s an efficiency and effortlessness in his movement. He’s like  this when he enters the hotel room in New Orleans, where I am waiting to  interview him. “Where should we sit?” he asks, and he walks to the window and  pulls back the scrim, letting August’s white-hot sunlight into the room.  Washington, dressed in sweats and a Yankees cap pulled low on his head, drops in  a chair and points at one beside him. I sit. We’re like two men on the edge of a  pier, staring forward, not really looking at each other.

Washington is in New Orleans filming his forty-second movie, 2 Guns,  with Mark Wahlberg. He has played everyone from Malcolm X to Hurricane Carter  and racked up two Oscars (Glory and Training Day), as well as  starred in films as disparate as Philadelphia, Remember the Titans, Crimson  Tide, and the forthcoming Flight. And yet what do you really  know about Denzel Washington? (Other than the obvious fact that being 57 hasn’t  cost him a single step.) Thirty years after he introduced himself as Dr. Philip  Chandler on St. Elsewhere, one of the most dominant leading men of his  generation remains a very public mystery.

What’s your first memory of being onstage?   I was around 7, 8,  whatever I was. We   did a talent show at the Boys Club. Me and another guy,  Wayne Bridges—God rest his soul—he’s the father of Chris Bridges, Ludacris. We  decided to be the Beatles. So we went to John’s Bargain Store and bought fake  guitars and wigs and did   “I Want to Hold Your Hand.”

Is there an actor who has influenced you?   There’s a scene in The Godfather II. De Niro’s in a theater. And he’s looking back. It’s  just a look. I don’t think I’ve ever imitated another actor, but there’s nothing  wrong with learning from them.

What is the first movie that you recall? King Kong. The Wizard  of Oz was a  big one. I remember Caged, these women in prison. I  liked that one. But I wasn’t a movie buff. Never thought about the movies. When  I was in my teens, it was movies like Shaft or Superfly. I wanted  to be like those guys. But I never thought about being an actor, ever. I  wanted to be Jim Brown or Gale Sayers, not Sidney Poitier. When I started  acting, there weren’t any big black movie stars. There was a little Billy Dee  Williams and some Richard Pryor. That was it.

Are there any roles you’ve turned down  that you regret? Seven and Michael Clayton. With Clayton, it was the best  material I had read in a  long time, but I was nervous about a first-time  director, and I was wrong. It happens.

And you wanted a part in Platoon?   That and Full Metal  Jacket. They were like, “Well, [Kubrick] doesn’t send out his scripts.” I  was like, “Well, then what do you want me to do?” Platoon, I wanted to  play the part Willem Dafoe played.

Do you have any code you live by? I read from the Bible every day,  and I read my Daily Word. I read something great yesterday. It said,  “Don’t aspire to make a living. Aspire to make a difference.”

In some ways, you’re a cipher. There’s not much you put out there. But that’s not my job to put stuff out there. Sidney Poitier told me this years  ago: “If they see you for free all week, they won’t pay to see you on the  weekend, because they feel like they’ve seen you. If you walk by  the magazine  section in the supermarket and they’ve known you all their life, there’s no  mystery. They can’t take the ride.” My professional work is being a better  actor.  I don’t know how to be a celebrity.

So if they want to see you that way— I’ve got my own things that I  will and won’t do, but it’s not because I “carry the weight of the  African-American something” or whatever. I can’t. I’m an actor. First of all,  I  don’t take myself that seriously. I take  what I do seriously, and I try to do a  good job.

You’ve worked with Gene Hackman.  Any other titans you want to shoot  with? All of ’em. Anybody whose last name ends in an o. De Niro. Pacino.  I cut my teeth watching them. Going back to the idea of learning things from  other actors—Laurence Olivier was an outside-in kind of guy. He’d find a handle,  something on the outside. The Method guys were inside-out. I use a little bit of  both. For Mo’ Better Blues, I’ll pick up a trumpet. Not “Oh, what is the  emotional innards of a jazz musician?” Hurricane? Start boxing. Sometimes  it starts on the outside. Sometimes on the inside.

When the Denzel biopic is made, what  would an actor need to have in his  performance to make you say, “He got me”? That suggests I know what it  is, and  I don’t want to know what it is. That’s part  of the mystery. It is  what it is. I don’t go,  “I gotta make sure I put some of that Denzel  Washington-ism in the movie.” I don’t  want tricks. I don’t want to lose my  mojo.

When you were playing Malcolm X, you  said one of the things that helped  you “get” Malcolm was noticing that he  was always pointing.    That was  one of the keys. It wasn’t the key. He does a lot of that. And he didn’t  say “against,” he said, “a-ginst.” So I started throwing in extra  “a-ginst”s, because it made me feel like I was in rhythm.