Home › Christian Living › You Are Worthy 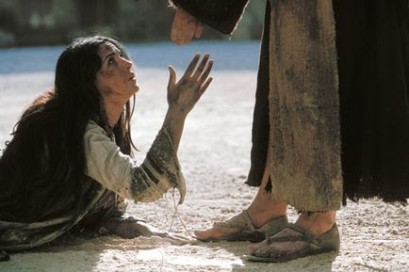 You Are Worthy, by Lyn Leahz

“Robert, I’m sorry, but we’re going to have to let you go. Yesterday you were late, last week your kids were sick, the week before that you had car trouble; there’s just no way we can keep you. Anyone else would have been out the door a long time ago. I feel we’ve been more than fair with you.”

Rob stared down at his lap, the contents of his stomach unsettled as a sour acidic taste began pervading the back of his throat. How would he tell Becky? And what about the kids? This had been his fourth job in three years. He was hard working, but he had the worst of luck when it came to problems–they just kept happening, and it was beyond his control.

After a moment of silence, he swallowed hard, as a cold sweat took residence all over his body. “Sir, are you sure there’s no way…”

His boss interrupted, “No, there’s no way we can give you any more chances.” He brusquely slid the paper across his desk toward Rob, pointing at the line where he was to sign. “Now I need you to sign right here that we’ve had this discussion, and if you want to write down your side of it, that’s fine. The signature doesn’t mean you agree with the decision, it just means it happened.” He looked down at his watch. “Now if you could just do this for me, I’m late to an important meeting.”

Rob signed and stood up, gulping in a deep breath of air as he did. He wasn’t sure what to say, so he said nothing at all as he signed the paper and then left the office.

He received blank stares from fellow employees who said nothing as he passed by. He climbed into his car and shut the door, resting his head against the steering wheel as the tears began to pour. “Oh Lord, what am I going to do? I can’t take this anymore Father. Why? I do everything I’m supposed to do, and I walk righteously before you; why do I keep going through this? I don’t understand. Please Father, tell me what I’m supposed to tell Becky? She just gave birth to our third child a few weeks ago; she can’t work. What are we going to do?”

An invisible darkness he could not see, and wasn’t even aware of, was comfortably settled next to him in the passenger seat with a sniveling grin. “That’s right Rob, you’re nothing but a failure! Nobody likes you at all! In fact, they hate you. You’re a disgrace to your wife, your children…to everyone! You should just go kill yourself. It wouldn’t be that hard. Just drive the car into a wall…you’d never feel a thing. Who’d miss you anyways? Your own children will someday see what a screw-up you are; you might as well save them the trouble.”

Rob began beating his fists against the wheel as he bellowed, “No! No! Why am I having thoughts of killing myself? I can’t kill myself, the children need me!”

The demon cackled, “They do? Oh now Rob, the children don’t need you! In fact, if you raise them, they’ll all turn out just like you–failures! All three of them will be nothing but failures. Your wife would be better off without you; at least she’d be able to get help from the government. But no, while you’re around, she gets nothing, and the children will starve. You really might want to reconsider….I think this is your only choice, ROBERT!”

The demon cackled and snickered some more as it tapped his long, jagged nails against the dashboard, unbeknownst to Rob.

He was covered in sweat from head to toe; it was literally dripping from him, saturating the seat and the steering wheel. “Maybe I should; I would actually be doing everyone a favor.”

He turned the ignition switch and burned rubber out of the parking lot, without a clue of where he was headed. He was driving aimlessly like a madman, running traffic lights, stop signs, not so much as caring what was around him. His head was throbbing, and his heart was pounding.

“Maybe I should call Becky and tell her goodbye.” The tears began streaming down his cheeks once again.

His dark friend next to him didn’t like that idea; Becky might talk him out of it. “Uh, Rob, I don’t think you want to do that. You’ll upset her, and she’s with the kids. What if she panic’s and accidentally puts them in harm’s way as a result? Besides, it’s better to surprise everyone; you know, make them all feel guilty for what they’re doing to you?”

Just as he turned the corner, he slammed his brakes, but it was too late. He had hit the guard rail hard, giving him a sudden jolt he hadn’t been expecting.

“Honey, look! We should pull over and help that person. What if they’re hurt?” Florence frantically shouted.

Jack, her husband was a Godly and upright man, and he agreed; as Christians, they should pull over and offer this person some help.

He cut the wheel sharply and turned the car around, pulling up behind Rob’s car. He leaned over and looked at his wife first before he got out. “Now you stay right here, okay? I’ll handle this.” He gave her a kiss before heading on over to the wrecked car to see what had happened.

Rob was unaware anyone had pulled over at all as he sat there weeping and trembling. “God, please help me, in the name of Jesus! Why won’t you just let me die Lord? What am I going to do?”

Jack spoke softly, not wanting to startle him too much since he hadn’t yet noticed his presence. “Hello, sir, are you okay?”

Rob glanced up, trying to wipe off his eyes and straighten himself, but it was no use. He knew the man had already seen, and probably heard, everything. “Yes I’m okay, but I’m not okay.”

Jack glared at him with love and compassion in his eyes, his face radiating the glory of God. “Would you like to talk about it? The Lord told my wife and I to pull over and help you; so here I am. What’s wrong…”

“Rob,” he sniffled and cleared his throat, “the name’s Rob.”

“I’m Jack; so why don’t you tell me what it is that has you so upset, well, besides the fact that you’ve just hit the guard rail and messed up your car.” He smiled softly.

Rob told him everything. Normally he wouldn’t share his personal problems with a complete stranger, but somehow this seemed different. “Hmm, well, number one we need to pray, and number two, you need to thank our heavenly Father for saving you from a grave mistake. Your children need you, and your wife needs you.”

All at once, Rob instantly felt relieved, as if a heaviness had been removed from his chest. Jack smiled again, and Rob thought He could see the Spirit of Jesus Himself painted across the man’s face. “Now son, listen to me; here’s the other reason you need to give God thanks..you had a hideous demon by your side a moment ago. I saw him sitting there, and he didn’t like me too much; the power of the name of Jesus made Him go away. Next, you need to thank Him because I’ve been praying for the right person to fill a position that I haven’t been able to fill now for over a month. I couldn’t figure out why because it pays very well, and it’s a good job; one that normally would get filled in less than a day. God must’ve been saving it just for you!”

“So don’t worry, because I am with you. Don’t be afraid, because I am your God. I will make you strong and will help you; I will support you with my right hand that saves you.” Isaiah 41:10

“Do not worry about anything, but pray and ask God for everything you need, always giving thanks. And God’s peace, which is so great we cannot understand it, will keep your hearts and minds in Christ Jesus. Brothers and sisters, think about the things that are good and worthy of praise. Think about the things that are true and honorable and right and pure and beautiful and respected.” Philippians 4:6-8